It may have been an away game for Pittsburgh, but a huge sigh of relief could be heard up and down the east coast (and even down to my house in Miami) as the Steelers pulled off their first win of the season against the New York Jets at MetLife Stadium.

With a final score of 19-6, Pittsburgh showed immense improvement over what has been deemed one of the worst starts to a season in what felt like (in my opinion) more years than Dan Rooney is old. In other words, a whole bunch.

The game itself brought a spectacular beacon of hope to Pittsburgh fans (and players) after a 10-point lag early in the third quarter diminished.  New York may have moved the ball to the Steelers’ 23-yard line, but rookie QB Geno Smith (who I couldn’t help but notice has very nice teeth during an interview…props to the NFL dental plan) threw a pass into triple coverage and was picked off by Steelers free safety Ryan Clark (also nice teeth) at the 1-yard line. This pretty much set the win in stone for Pittsburgh. 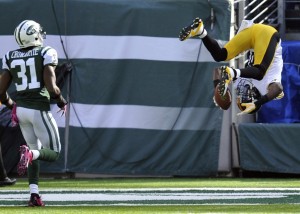 Other positives included Steelers defense pretty much forcing Smith on the run throughout the entire game, sacking him three times and picking him off twice (the cherry on top). It was also nice to see Troy Polamalu playing well, despite criticism he has received due to his not-so-young age, showing signs of his Flyin’ Hawaiian nickname once again.

In other news, Coach Tomlin has banned somersaulting into the end zone after Emmanuel Sanders decided to flip in after his touchdown. Tomlin says it’s silly and not worth the risk of injury. While I agree with Coach Tomlin, that touchdown for Pittsburgh DID deserve some over the top celebrating!

Moving forward into this week’s game against those dirty birds…The Ravens (insert my moan of disgust here). I’m happy to point out that while Pittsburgh has had a disappointing season thus far (now at 1-4), let’s not forget their pass defense remains one of the best statistically, allowing 196 yards passing per game. (Hey, it’s something, right?) Sources say the odds are against Ravens QB Joe Flacco having a strong game at Pittsburgh.

We shall see, as Roethlisberger seems ready to play this weekend. I only hope he doesn’t revert back to the not-so-Big-Ben of games past…i.e. The “let’s see how many times Ben can get sacked in one game” Game.

I hate that game.

This story, along with other NFL and college football news and commentary, can be found at http://www.nflandcollegefootball.com/.